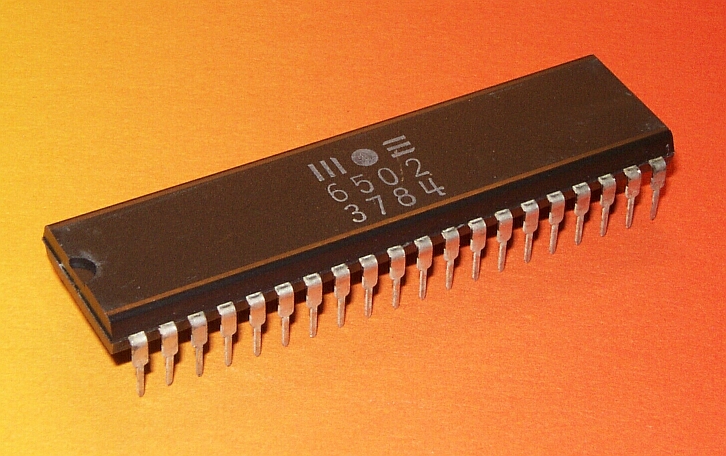 For people born in the seventies, 6502 is a magic number. It was the name of one of the most used processors in electronic devices of the eighties such as the Apple 2, the commodore 64, the nintendo NES e.t.c.

For me everything started there. I did not write any assembly codes for years but at the beginning of my career, this was still something you write on a résumé.

Writing 6502 codes in the old days was a nightmare. Some assembler tools like MERLIN helped a lot but it has nothing in common with the modern technology we are using nowadays.

Even with all these limitations, it was possible to write incredible software by using tricks that did not make the code easily maintainable but make it efficient.

While I was browsing on the internet, I ended up on a site that has a wonderful javascript emulator of the 6502. I definitively advice to read it and play with it, as it makes a wonderful introduction to assembly language. At the end, you will find a fully playable snake game using less than 700 bytes of code.

So I will add a small example of how to create  a FillRect subroutine using this processor. Note that the emulator uses a low resolution graphic mode that starts at memory $200, is 0x20 pixels large and has 20 lines. So the third pixel of line 2 is at address 200+20+2 => $222.

The following program will draw three rectangles using page zero to pass parameters to the subroutines.

Simply copy the code in the source in one of the emulators available here.You should end up after pushing the “assemble” and then the “run” button with the nice picture below. 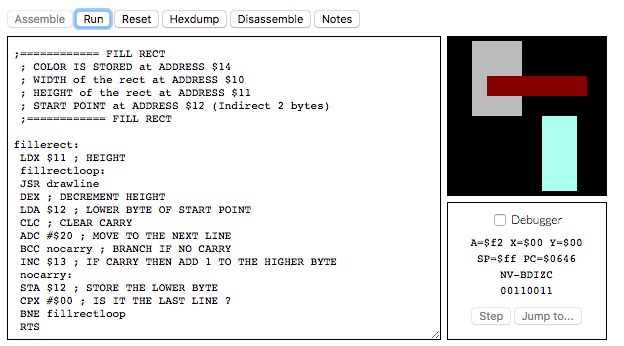 Note that the full code is 104 bytes long but that the two routines (Fill rect and drawline) only use 33 bytes ! There are other ways to write the same code and it is probably not the most efficient one, but at least it is readable.

Heavily interested in new technologies, I like to upgrade old software to the most recent standards and stack as many data I can find in order to mine it for unexpected parterns.